Having already spent several years developing relationships in the insulation world, each partner brought his own area of expertise to the equation, contributing to critical decision-making procedures early in the start-up process. You may not give much thought to insulating your crawl space. But high humidity in soil makes crawl spaces susceptible to moisture and deterioration. The humidity causes the crawl space to become damp and this environment can attract mold, dust and dirt, rodents and insects. This unhealthy environment in your crawl space directly affects your home and family. Since air flows from the ground upward, the moist air from your crawl space and all the contaminants flow up into your living space.

Benefits of insulating your crawl space: Because your crawl space has air vents and is in contact with the ground, it is exposed to outside elements. This could cause pipes in your crawl space to freeze during even a brief cold spell. It is important to take precautionary steps to protect your crawl space before temperatures dive. If not, you could end up with burst pipes.

Some of the most common quick fixes are incorrect and simply do not work. These fixes include closing the air vents, letting your faucets trickle, or wrapping vents and pipes. There are many reasons why these fixes do not work:

Reach out to a professional insulation expert for a quote. Contact ABS Insulating and we can help! The cost of rain gutters can vary. Factors that influence the cost of rain gutters include the size, material, addition of leaf gutter protection and more. Gutters come in a variety of sizes, most common are 5” and 6” gutters. Adding leaf protection to a new gutter system can help prevent debris from accumulating in the gutters and can help them to function properly.

What is most important is to have rain gutters professionally installed. If gutters are not properly installed, water can leak behind exterior walls and pool around the foundation. Be sure your home is properly protected and hire a professional gutter company. The gutter pros at ABS Insulating provide free estimates and can help protect your home from costly water damage. Springtime in Charlotte, NC means summer and long, fun-filled days are coming soon. If you suffer from allergies, spring and summer may not be seasons that you welcome. Dust and pollutants can enter your home through your home penetration points which exist around windows, HVAC venting, can lights, and chimneys. The allergens then reside in the air you breathe and can worsen allergy or asthma symptoms.

Always hire a professional when air sealing your home whether it is an existing home or a new build. A professional is able to detect penetration points in your home that are not visible to the naked eye and will ensure that your home is thoroughly and correctly air sealed. Times flies and it is already spring! We will enjoy more sunshine and warmer weather. But it also means winter snow and ice will be melting and we can expect spring showers.

It is important to make sure that your crawl space is in good condition so water does not enter and your home maintains its structural integrity.

To prepare your home for spring, keep these tips in mind when you examine your crawl space:

INSULATION
If your crawl space is correctly insulated and conditioned, the floors in your home will sustain a more even temperature. Consider using spray foam insulation if you decide to insulate your crawl space. One benefit of spray foam is that it insulates, seals cracks and other penetration points in one process.

You can add storage space and increase the square footage of your home by totally sealing your crawl space (also known as a conditioned crawl space).

CRACKS
The formation of cracks in your crawl space walls is common. These cracks should be sealed to keep moisture and pests out of your crawl space. Spray foam can help by insulating and air sealing in one step.

With the arrival of Spring, now is a great time to check out your crawl space. Contact our office to schedule a free estimate. Contact us if you have other crawl space or insulation questions! 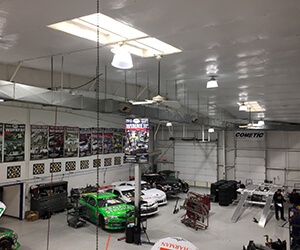 Looking for retrofit insulation for a commercial space or warehouse? There are many great insulation
products to meet your need. One cost effective solution is the RetroShield® System.

This system uses patented Clip & Pin components that are installed in one pass to reduce any down time. In addition to adding R-value and increasing energy efficiency, RetroShield® helps brighten the workspace and improves the overall appearance.

If you are looking for a retrofit insulation solution for your commercial space or warehouse, we can help! Contact ABS Insulating to discuss your project. Most people think that insulating their attic is unnecessary and a waste of money because no one lives
or sleeps there, right? Wrong! Insulation will help keep your home’s inside temperature cooler in the summer and warmer in the winter. Insulation adds a lid to your home to keep the heat from escaping in the cold months and warm air from entering your home from the outside in the warm months.

After thoroughly cleaning your attic to get rid of any pest remains or droppings, air sealing and insulation should be installed. Air sealing closes any openings that might allow moisture, outside air or pests to enter. Insulation creates a thermal barrier to prevent heat transfer between conditioned and unconditioned spaces. Winter is around the corner. Unless you’ve invested in home energy improvements this year, your home will be as inefficient and uncomfortable this winter as it was last year. If your home has a crawl space, sealing and insulating your crawl space can dramatically improve your home’s comfort, reduce energy bills and improve the quality of air inside your home.

Today’s building science proves that what’s underneath your home affects the inside comfort. A home’s natural airflow is from bottom to top (floor to ceiling). As your home naturally breathes, air is drawn up from the basement or crawl space, through the living area and out the attic. This natural airflow means air from a moist crawl space (and everything in the crawl space) flows up and into your home’s living area.

Here are three reasons to insulate your crawl space before winter: 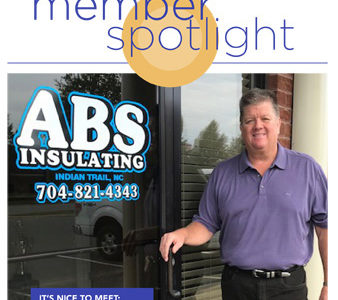 The ABS Insulating team is proud to be led by Allan Hoppe. In 1991 Allan partnered with two colleagues to start ABS Insulating. Allan is now the sole owner. He oversees three branches in Charlotte, Myrtle Beach and Charleston

Recently Allan was featured in the National Insulation Contractors’ Exchange member spotlight. Click here to learn more about our leadership, history and future!